Celebrities and their dental stories

Posted by Daria in Blog entry 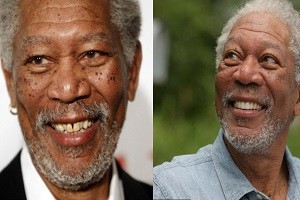 Many celebrities, just like any one of us, were not born with perfect, white smile. They may have the inborn talent and skill, but straight, gleaming teeth are often a matter of lottery – you either get it or you don’t and unfortunately there’s nobody to blame.

However, when it comes to celebrities, their teeth are an integral part of their job – it represents them. In interviews, photo shoots, films, basically anywhere they appear they have to look good for their fans and paparazzi. Can you imagine a famous singer with crooked, yellowish teeth? Me neither.

There are many famous people who underwent cosmetic dentistry. Some of the differences are quite shocking and it seems pretty amazing what dentists can actually achieve. It also shows how a simple procedure may greatly change the smile, face and overall look. Celebrities are the ones who most strongly are aware of the importance of pearly white, “Hollywood” smile!

Here are some examples of those well-known people who underwent dental transformation: 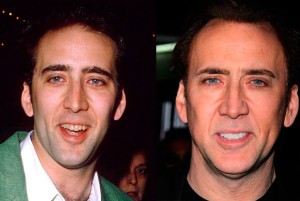 That’s an example of a great actor who was willing to sacrifice some of his teeth for a role in a film (“Bird”, 1984) as he had to have a few teeth pulled out. Of course, afterwards he realised that, due to his profession, he had to quickly improve the look of his teeth so he opted for gleaming white veneers. You can definitely tell the difference! 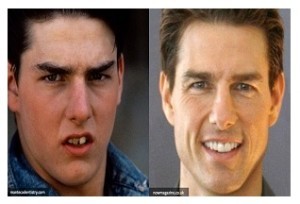 He’s one of the most popular Hollywood actors, best know for his hits “Top Gun” and “Mission Impossible”. Mr Cruise was more than unlucky with his teeth – they were very crooked and discoloured. The before-after photos we can see now are shocking, especially to think that such a ladies’ man had such bad teeth when he was younger. Apparently, his teeth required not only straightening, but also whitening and later also veneers. 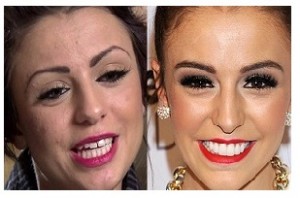 Famous from the British singing programme “X Factor”, Cher Lloyd became known for her lovely voice and pretty face. However, her biggest complex was her teeth, especially the gap in the front. Soon with gaining popularity she could afford excellent treatment which eliminated all her problems and gave her teeth any other girl can be jealous of! 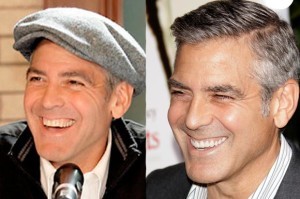 It is common knowledge to anyone who follows celebrity gossip that Mr Clooney regularly grinds his teeth because of the amount of stress and pressure he is under. Although he doesn’t have any major problems with the teeth themselves, the grinding means that he has to opt for veneers regularly. It does make us wonder what makes such a gorgeous man so stressed out…? 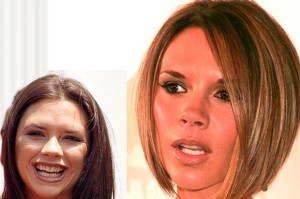 Everyone knows “Posh Spice” and her love for glamorous outfits and fashion. However, not everyone knows that her teeth used to be far from perfect. Over time, she got rid of the wide gaps and improved their overall look when she became the most popular member of Spice Girls in the 1990s. 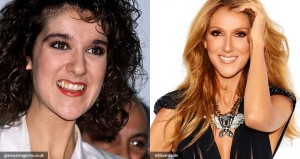 A woman with excellent, stunning voice which unfortunately couldn’t be said about her teeth, at least at the beginning of her career. She decided to undergo some cosmetic dentistry to make her teeth look smaller, whiter and worthy of a world-class singer. 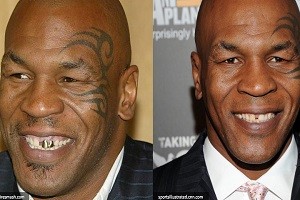 Boxers may not be typical types of celebrities but they are still public figures who are especially prone to losing teeth due to their job. Unfortunately he suffered exactly that and replaced the gaps with gold crowns first of all. After some time, he decided to change them for porcelain veneers to make them look slightly smaller and better. 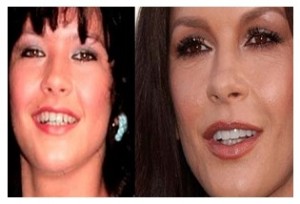 The Oscar-winner Zeta-Jones used to be teased at school due to crooked teeth which is hard to believe now, considering her stunning beauty and great talent. She used to wear braces as a teenager, but what really helped her improve her teeth was the cosmetic treatment she had as an adult. This is almost like the modern version of the ugly duckling!

The star of “Shawshank Redemption”, “Seven” and “The Bucket List”, like many other people, suffered from teeth deterioriation with age. They became more yellowish and not very representative. Mr Freeman decided to have them nicely whitened and he also decided to eliminate the gap which he had in the front – as you can see, his cosmetic dentist took care of all that! 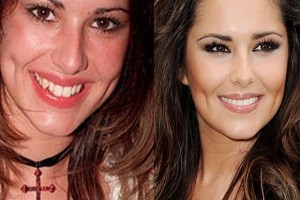 It’s hard to believe that Cheryl Cole’s teeth weren’t always so straight and gleaming white. Becoming one of the judges of the popular show “X Factor”, she decided to improve her teeth. Her teeth were no longer pointed and long, they gained an even, straight line and pearly white, hollywood shine!

Dental treatments most popular among celebrities:

This is a dental procedure connected with the popular phrase “hollywood smile”. Veneers are simply small, thin layers in a shape of a false nail, usually made from porcelain. They can cover discoloured, chipped or crooked teeth and fill gaps between teeth as well!

They provide quick and effective results, completely renewing your teeth and improving your smile.

Ideal option for chipped and crooked teeth. Crowns are artificial teeth which are individually made to fit in the gap, and to resemble natural teeth colour so they wouldn’t stand out among the rest. Crowns are made from different materials, usually porcelain or ceramic as they are durable and white; because of that, crowns are one of the most popular dental solutions.

Dental implants are practically very small screws which substitute the root of a tooth. They provide an excellent and long-lasting solution for replacing one or even several teeth. Crowns or bridges are fitted on such implants at a later date.

Probably most common procedure, not only among famous people. It’s an easy and affordable type of treatment providing excellent results. Let your teeth shine!

Do you think that cosmetic treatment is unreachable for you? Well, don’t think that! Such treatment is more affordable than you might think and it’s accesible to anyone, not just celebrities. Healthy, straight, white-looking teeth should be everyone’s priority to feel and look good. We all deserve a bit of luxury, right?